Break Expectations and Be Unremarkable

For my first blog post, I'm going to discuss feminism, queer perspectives, and religion. Because that's a good way to introduce yourself.

Let's start with an image: 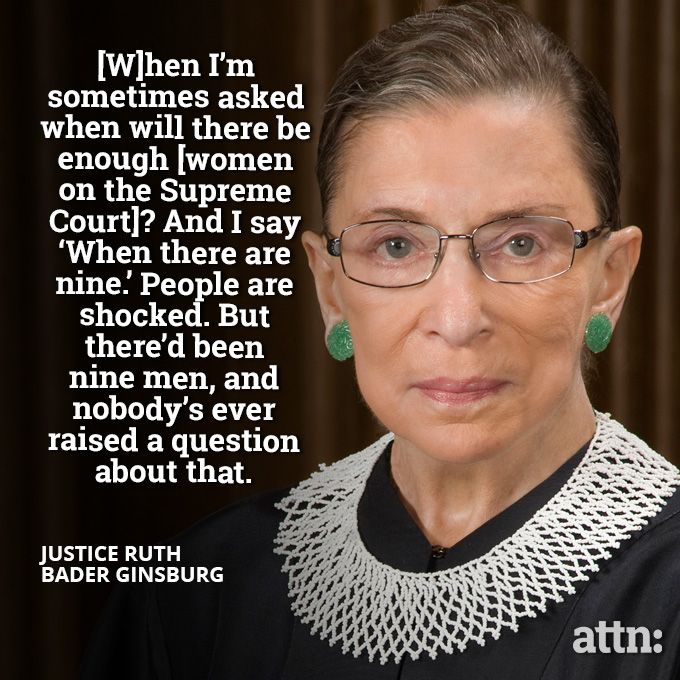 But Justice Ginsburg has a point, and made it well. And her point jumped out at me, like a lot of other feminist issues.

It still jumps out at me when a company is run by a female CEO.

It still jumps out at me when people pay attention to women's sports.

It still jumps out at me when a female artist doesn't fit the culturally desired body types.

And these things jump out at me because they're different from the expected normal.

We all have silent expectations about the way things are. It doesn't mean it's bad when those expectations are violated; heck, we may want them broken. But it does mean they're there, lingering in the backs of our minds. Things don't jump out when they're unremarkable.

Sitting in class one day, a professor of mine used the following example:

"A family was sitting at a table: a brother, a sister, and their two moms."

Another student in the class later said:

"That example with the moms earlier just felt really shoehorned in."

That example jumped out.

That student was expecting the stereotypical nuclear family, and were instead given a twist on that expectation.

A lot of people would phrase it more negatively: "throwing their sexuality in my face", flaunting, or "forcing their lifestyle on me." It's an example of something different, right there wherever they're looking.

Why is this everywhere all of a sudden?!

You may have noticed a 'flood' of commercials with queer families, like the following example:

You know how long the couple was on screen?

And it still didn't go unnoticed. Here's an article celebrating the two seconds of equality.

It's far easier to just go with what people are expecting. But it's also necessary to break these expectations, so that people are reminded of experiences that are outside of their own.

It takes extra effort to break the expectations. It may feel shoehorned in.

Good. That's the start of change.

Today, there is a local, trending story about a public high school who included a song about Ramadan at their holiday concert: Eid-un Sa'Eid. You can read that story here.

I'm not going to deny blatant fear and bias as a contributing factor here; Muslims are going through a very dark time right now in the way their fellow citizens are reacting to them. But lets look at one specific perspective on the issue:

Most of the complaints revolved around singing the song as a violation of their religious beliefs. Parents didn't want their children to be singing about Allah.

Below is a recording of the song, and a snippet of lyrics:

"It's a time of happiness, a time of joy
Thank You Allah for this blessed day...
Muslims unite to worship Allah
It's a time of brotherhood, a time of peace
Muslims are singing praises to Allah"
-Lyrics provided by Flash Lyrics

The students also sang Away in a Manger at the same concert:

"I love Thee, Lord Jesus, look down from the sky
And stay by my cradle till morning is nigh.
Be near me, Lord Jesus, I ask Thee to stay
Close by me forever, and love me, I pray."
-Lyrics provided by MetroLyrics

Both songs heavily evoke a relationship with their relevent God. So why is one of these songs OK and the other not?

Because it's Christmas, when Jesus was born. And Ramadan was in June this year.

And there'd still be complaints if the holiday was in December. Point, but missing the bigger issue:

Why is it OK to sing religious Christmas music at all? A public school a religiously neutral environment.

And not all of the students love Jesus.

And not all of the students love Allah.

The inability to see that students also were singing the traditional Christian carols that evening, and failing to draw a comparison between those traditional carols and a nontraditional Islamic song?

That's expectations not being met.

The expectation was Christmas songs, and that was violated. There would have not be a news article about a public school having Christianity-based Christmas songs at a concert. It's unremarkable.

But those expectations were violated, and a different religion's song was sung. And people noticed.

And, for some, it was confusing, and it felt weird, and there was resistance.

Good. That's the start of change.

The ultimate point of acceptance is when it doesn't even have to be thought about. It doesn't jump out. It becomes unremarkable.

So break expectations. Throw in an unusual example. Sing a 'controversial' song.

The more people hear about things, the more unremarkable they become, the less strange and scary they'll feel.